Two huge, long mounds of stones and boulders are hidden in a wood on the north coast of Inderøy, an island in Trondheimsfjord. They are oriented about NW-SE, at an angle to the present shoreline, 125 m southeast of it and about 12 m a.s.l. They were originally thought to be burial cairns, but in 1950 the site was reinterpreted as a boathouse because a low, bank was seen to connect the mounds in the southwest. A gradiometer survey, supported by strandline displacement, 14C dating and field observations, now suggests that this possible boathouse may have been rebuilt to be used as a dwelling and byre after isostatic land uplift had left the building too far from the sea to be practicable as a boathouse. The gradiometer map indicates remnants of a double gable wall nearest the sea in the northwest, not visible on the ground. Moreover, the map indicates that the massive long walls consist of a double cavity wall, but they appear less substantial in the southwest, indicative of a byre. This interpretation is supported by an apparent door in the southernmost corner, opening towards two low mounds which may mark remnants of walls that led livestock out to grazing. The (?secondary) longhouse theory is further supported by a 14C dating of charcoal from midway along the southwestern long wall, which is some 400 years younger than the strandline displacement curve indicates is consistent with a boathouse at this site. The mapping also shows that the building is not more than ca. 11-12 m wide internally, instead of the 17-18 m which it appears to be on the ground. 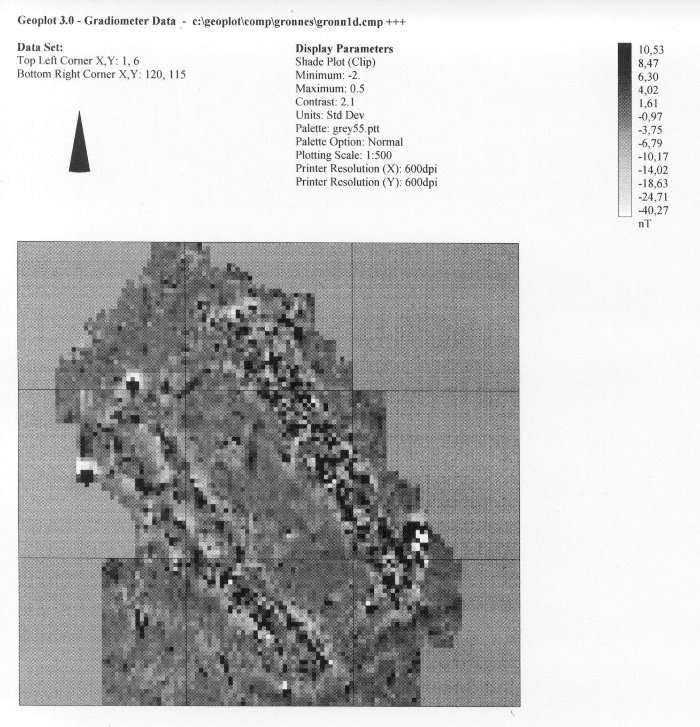