Under favourable conditions, with good magnetic contrast (positive or negative anomalies) between archaeological features and their immediate surroundings, it is possible to recognise structures (remains of buildings, hearths, pits, graves, etc.). Sometimes, a firm interpretation can be made, or simple probing will confirm a suspected feature. In doubtful cases, it may be necessary to dig a trial pit or trench, but you will have specific evidence indicating where it is most advantageous to dig.

Such archaeological prospecting is especially favourable

Mapping with a fluxgate gradiometer

Backed up by long experience from geological and archaeological field mapping in Norway, RB GeoArk has for many years been carrying out magnetometric investigations of prehistoric and potential prehistoric sites on behalf of archaeologists and others. Some 70 areas at more than 40 sites from Tromsø and Laksefjord in the north to Stavanger in the southwest of Norway, and also on the Faeroes, have so far been investigated.

The equipment used for this mapping is a gradiometer, an advanced form of magnetometer specially developed for rapid archaeological prospecting. This geophysical instrument registers small variations in the magnetic signals emanating from the ground. These signals are processed by a computer program and printed out as maps.

Examples of areas that have been mapped in Norway

RB GeoArk personnel have long, and countrywide, experience of seeking, recording and describing prehistoric sites for the regional museums in Norway, partly in connection with the production of land-use maps for the Norwegian Mapping Authority. Link: https://askeladden.ra.no

Presenting archaeology for a wider public

RB GeoArk personnel have carried out many assignments in connection with the presentation of cultural heritage sites and archaeological discoveries, chiefly in central Norway. These have included editing a bi-annual magazine, writing chapters in books on local history, preparing texts and illustrations for information signs, booklets and pamphlets, and acting as guides on excursions.

Various information signs and exhibitions in central and northern Norway

Illustrations of archaeological and historical sites and events

In connection with the above, many watercolours and drawings have been made to illustrate situations from prehistory and historical time for publications, TV programmes and signs. 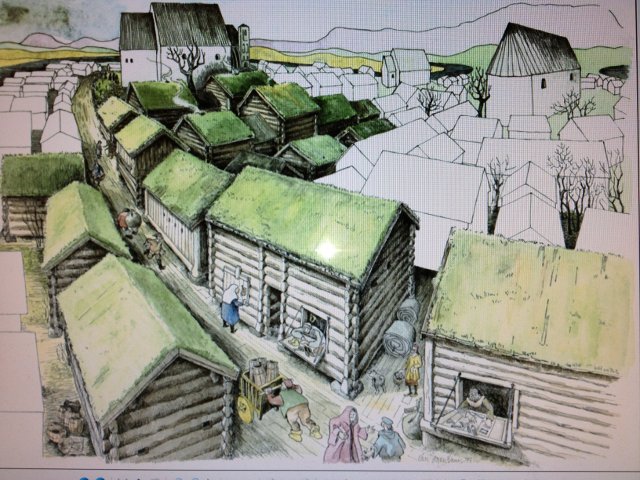 Kjøpmannsgata, a street in Trondheim about 1250 AD - book illustration

RB GeoArk has personnel with many years’ experience throughout Norway of participating in and managing archaeological excavations, mainly on behalf of the regional museums. When prior permission has been obtained, we can undertake such excavations on our own behalf or for clients. Such an excavation is ongoing at Klæbu, central Norway, in connection with the longhouse presented elsewhere on this web site.